Following the fence posts to Curleywee 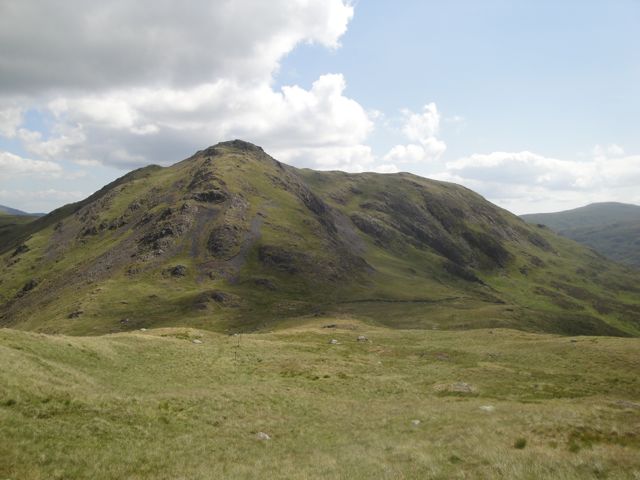 After the many wet and cloudy weekends we were at last blessed with sun. I had had my eye on Curleywee for a while, especially when driving down the A75, and fancied attacking it from the south. So nice and early I set off for Auchinleck and decided to see how far up the forest track I could drive. If I couldn’t get far the plan was to head up Black Benwee and do an anticlockwise route. If I could get to Lamachan I would head across the firebreaks to Larg Hill and go Clockwise.

Past Pulbae the track deteriorated and if it had been wetter I don’t think the car would have made it. As it was it was dry and further along the track was in much better nick so I drove north until a track went off left towards Larg Hill and parked in a space there. 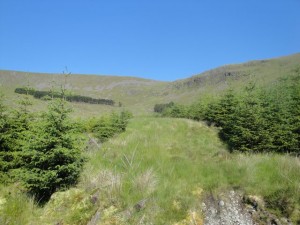 Forest break up to Nick of the Brushy

The first mile was along the forest track, with the ridge of Larg and Lamachan ahead of me and Curleywee, my real goal, visible when I looked over my shoulder. I had read of walkers climbing up to the col between Larg and Lamachan, at the Nick of the Brushy, and this was my initial idea. On getting to an appropriate forest break, however, I looked up at the scree filled hillside and decided to find another way. Strangely I found a mole on the track. I’m not sure if it was dead (most likely) or playing dead because I was there.

The next choice for ascent was at Cordorcan Craigs, and the OS map showed a few forest breaks so I looked out for a suitable (short and passable) break. These forest breaks were separating sections of impassable felled forest. I found a good section that looked to have a faint path suggesting others had trod the same route. This had grass of the type I usually associate with marshland, but the ground was dry… mostly.

After a fence the gradient increased and I tried to use the rocks as a staircase where I could, since steps from rock do seem more efficient than those from grass. In places the ground was uncomfortably steep but I made sure I didn’t look down unless I was on what might be termed a ledge. What I did learn was that not all rocks are firmly attached to the hill.

I eventually spotted a wall and thought I was near the top. I decided to take a breather leaning on the wall. From there I had a view of Curleywee beyond Bennanbrack, Millfore, Cairnsmore of Fleet and Wigton Bay. The wall disappeared over the horizon just a hundred metres away, but once I crested that hill I could see that the summit was still 500m away. By now however I was on the whaleback of Larg Hill and the ground was short close-cropped grass without wet patches. The sun was beating down and I regretted forgetting my sun-hat. 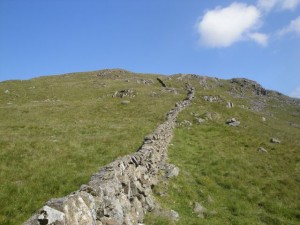 Not the final few metres up Larg Hill

Twelve minutes after this photo I was faced with… 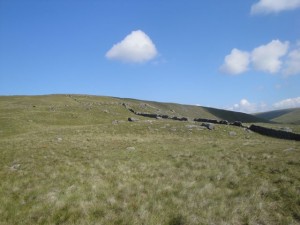 Having reached the summit of Larg Hill, I was treated to my first view of the Merrick and could clearly see the route I would take along Lamachan’s long ridge. 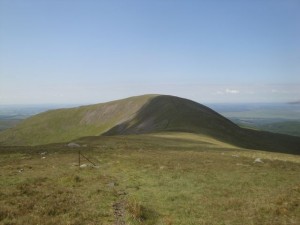 The whaleback of Larg Hill

A drystone dyke leads the way down to the col between Larg hill and Lamachan, and it is quite a dip. I had to take a detour to avoid a short steep area which would have been my way up if I had climbed the Nick of the Brushy. The dyke gave up the ghost here and the fence/wall marked on the OS map is now just a line of rusting fence posts with no sign of the wire that must once have joined them. I did edge over to have a look down the Nick, and I’m glad I gave it a miss.

Lamachan, though the highest hill I was to climb in the day was, of itself, a little boring. It is a Donald and a Graham but is just a flat expanse of grass with a cairn possibly marking the summit. Having said that, the views from Lamachan are the finest I have ever witnessed. Sadly my photos were unable to capture the grandeur of these views, the silver appearance is lost in the photos, so I will have to describe them. 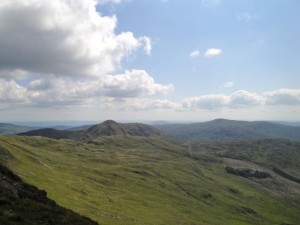 Before me were the Dungeon Hills, glinting silver in the morning sun, with the Glenhead lochs’ still water beneath the Rig of the Jarkness. To their left was Merrick, behind them Mullwharchar, appearing black in shadow, and to the right the Rhinns of Kells. This in itself was spectacular but the panorama included the three Cairnsmores, Millfore and Wigtown Bay. Bennanbrack’s ridge, looking quite narrow, led to Curleywee. 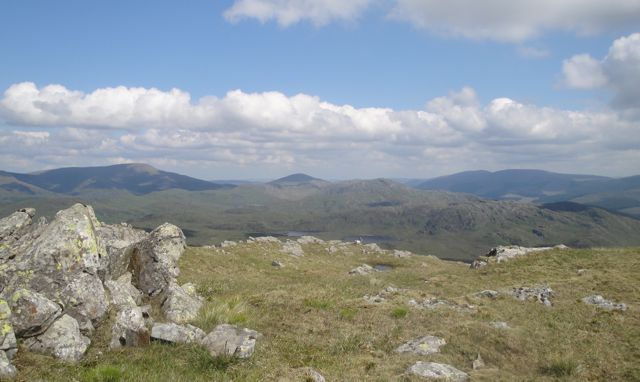 I followed the line of dilapidated fence posts along the Bennanbrack ridge and slowly saw Loch Dee come into view. The ridge is easy to walk but has several minor hills along the way so there is a little up and down. My other learning point for the day is to keep an eye where you are walking even if the views are great. Rocks and holes are randomly scattered on the hills. On Bennanbrack I came across a herd of three dozen or so feral goats who would watch my approach, often from quite close. I would see a goat up above me as I scrambled up some rocks but when I reached the top they would have moved a little further away. 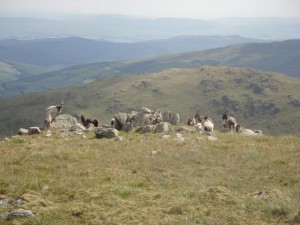 The fence posts were a reasonable guide but did at times head down quite steep sections which needed small detours. Further along the ridge they headed down towards a flatter area with small lochans, but I decided to stick to the ridge to avoid unnecessary reascent. Wasted effort I’m afraid since the ridge ended in a rather steep rocky section, so I retraced my steps and followed the fence posts. That’s my motto for this walk: follow the fence posts, and look where you’re stepping.

As I got closer to Curleywee I began to have some misgivings. It did look steep and was surrounded by scree slopes. I’d come this far, done two Donalds, perhaps I should come another day, by a different route? No I was here now, but how to get up. There was grass between the scree, should I take that? Or go round and have a look around the side? There was no obvious beaten track. 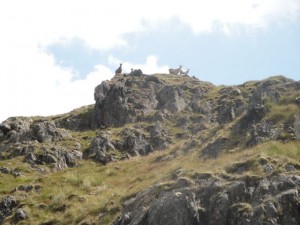 Watched from above by Goats on Curleywee

I decided to go for the direct approach and headed for the slope closest to me. There were half a dozen goats making their way up a scree slope without dislodging a single stone so I wondered about the scree. After a closer look I decided to stick to grass. Here I saw the first sign of another human being (other than the fence posts), a footprint. So someone else had been this way. Up I went picking my way up the slope, finding footholds, occasionally contouring on a goat track to a more amenable section and scrambling over rocks close to the summit. The goats watched from on high as before, then disappeared from sight.

And then I was there. Curleywee has a cairn which by chance has a a flattened stone ideally suited for resting the posterior whilst eating lunch, soaking up the sun and enjoying the views. It was a little windy but the hill’s name was a warning. Curleywee, from Cor Le Gaeith (pronounced gwee or geuh), the hill in the wind.

The goats managed to keep themselves close but out of sight. When I stood up I saw them just behind some nearby rocks. By the time I had the camera out they were gone, but again, not far. I can only presume they move until they can no longer see me.

My plan had been to go down the way I came up then head south to Bennan hill, then go down through the forest to the forestry road. From Curleywee, however I thought I could see a path where the Penkiln Burn headed down. Was it a path? Was it the burn? would it lead anywhere? 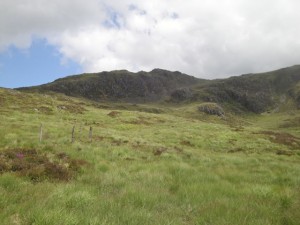 Nick of Curleywee, you can probably work out where I came down

I decided that I didn’t fancy going down the way I had come up so headed along the hill looking for a way down its southern face. I actually managed to find a relatively easy way down the Nick of Curleywee which seemed less steep than the ascent. The GPS track, however, records the decent as steeper than the ascent. I had the help of my trusty walking pole on the way down, but sadly lost it later (I must have dropped it at the car).

As I headed for the emphemeral path I found another fence, with wire this time. The ground did now start to show signs of its Galloway heritage: tussocks, bog etc. I stepped across a small watercourse and my path followed it as it grew into a wider stream and then eventually an impassably wide rock strewn burn, the Penkiln burn. The path I had seen was one of those waterlogged things with flattened grass into which your feet can sink quite deeply, so I needed to walk on the tussocks close to it. 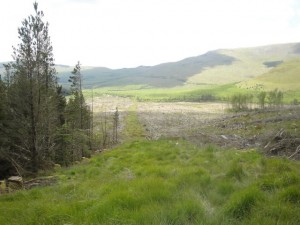 Looks easy but it’s not

The path led down by newly planted forest until it petered out amongst newly felled forest. This is difficult terrain. There are deep water filled ditches hidden beneath dead branches. Jumping quickly through this is asking for a broken ankle, so it has to be taken slowly. After a few minutes I was on the remains of a fire break. This looked easier but was more boggy, littered with rocks, some of which rocked, and the remains of felled trees.

By now the car was in view, which helps morale. The moment of joy, however, was when I noticed that a spur of forest track not on the OS map snaked round and crossed the firebreak I was toiling along. This spared me 500m of firebreak.

Walking back to the car I was able to look at the ridge I had walked that morning. I passed a small waterpool surrounded by moss with the appearance of an enchanted pool. Had it not been for my newly wetted feet it would have been a perfect day. As usual for these hills I had not seen another soul all day. 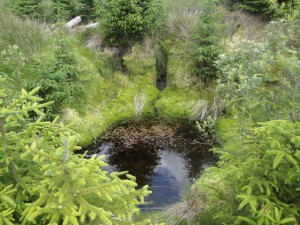 Share this...
This entry was posted in Dumfries & Galloway and tagged Donalds, Grahams. Bookmark the permalink.