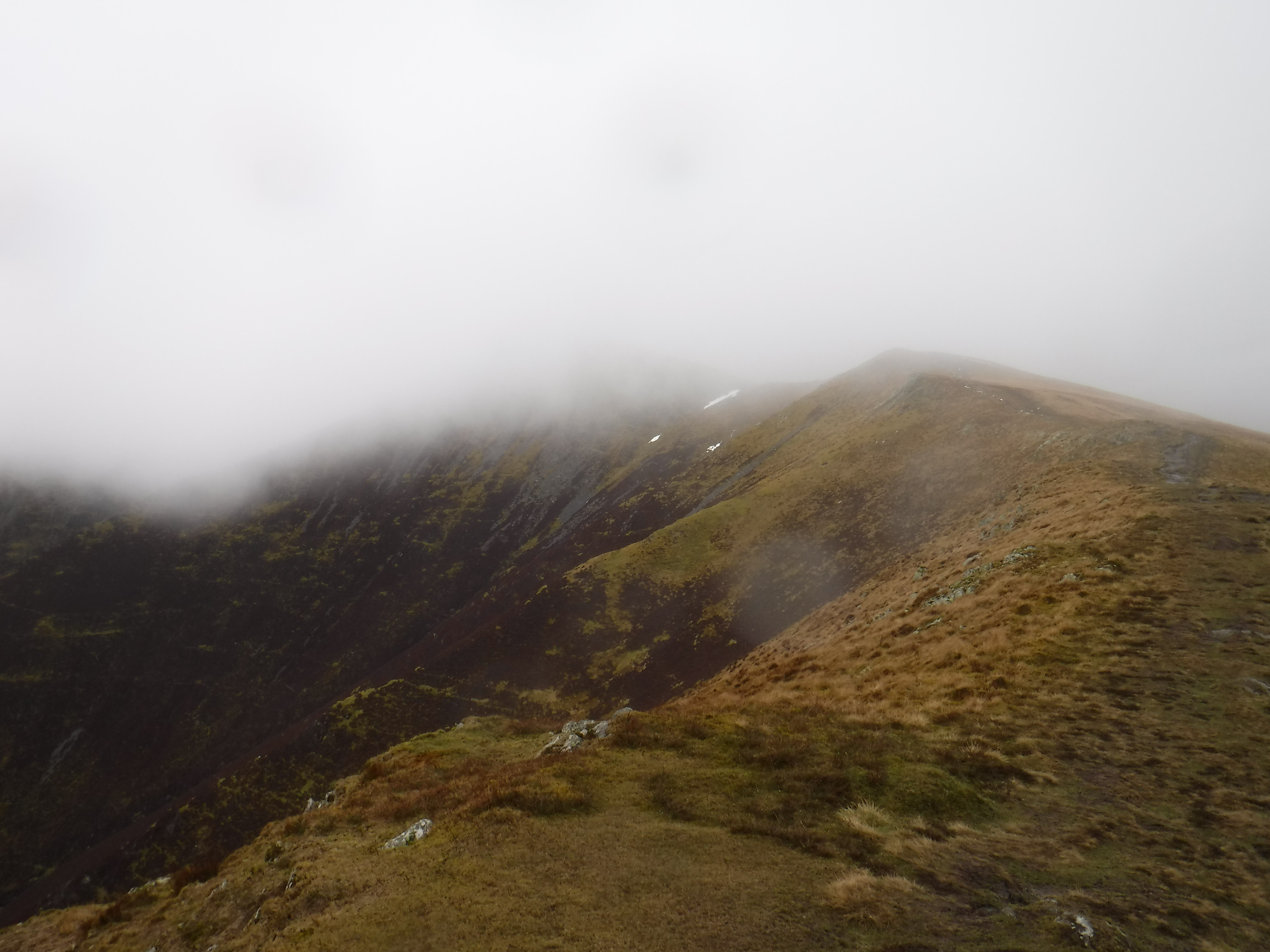 It has been some time since I have written up a walk, but the time has at last come. When last I ventured on to the Saddleback I mused that we had been cursed by the goddess of rain, see Cailleach’s Wrath. I had vowed only to re-climb Blencathra in good weather, and it has been on my to-do list of fair weather walks for too long. lately we have had weather warnings variously of rain, snow, ice and wind, but the yellow warnings had expired. Perhaps I was experiencing weather relatively rather than absolutely, why else would I have chosen to walk up Blencathra on one of Winter’s last days, with grey skies and rain forecast. Perhaps Cailleach herself had lured me back onto the slopes.

I had not given a great deal of thought to the day’s walk in the preceding days because of the inclement weather, waiting to closer to the day to chose a route. The day before my internet surfing had touched down on a page describing a “Walkers Blencathra”. I was hooked. The weather forecast forgotten. No not forgotten, discounted.

Fate almost delivered us to an alternative walk when I took the wrong turning and turned back on to the M6(S) at Penrith, realising just too late to correct the error. There was a hurried discussion regarding a late change of venue, perhaps to Shap or thereabouts, but we were able to turn back after 10 minutes or so.

Taking a little more care this time, I found the A66 and we drove along to Scales, parking the car at the wee parking area below Mousthwaite Comb. There was light rain in the air, the hilltops shrouded in cloud and the wind a little chilly.

We walked back across the little bridge then through a wooden gate and along a gravel path. My instinct told me that there was a degree of uphillness. Auto-correct wanted that to be unholiness, which would have put a whole new slant on the walk, but as it was it was just my unfitness giving me a message.

There were sheep in the nearby field, and though there was a fence between them and us, poor Christy had to stay on his lead initially. The path climbed steadily curing around on the col towards Mousthwaite Fell, but our route was to take us off the gravel and up onto Scales Fell to our left. As we looked for a path Audrey thought there was a pathway beside the fence containing the sheep. She was right as it turned out, and more about that later, but I didn’t think it was a path and continued on still looking for a path unto our left. Indeed I had come to the conclusion that I had missed the path and that perhaps we should continue onto Mousthwaite Fell and do the walk anti-clockwise when I came to a narrow track heading up to the left. By now I could let the Spaniel run free and started our first bit of steep ascent.

The first kilometre of the walk was a tiring climb and we had to take our time, stopping for jelly babies at 30 minutes and coffee at an hour. It has been a while since we did much hillwalking. This though got us on to the more gentle slopes atop Scales Fell and the going was easier. Unfortunately the cloud had descended and we were walking in wisps of mist, the way ahead completely hidden from us.

I was a little wary of continuing in poor visibility on route we didn’t know, especially not knowing what type of terrain we might face so we decided to head along to one of the minor humps of Scales Fell up ahead and then turn about and head back the way we had come.

Once at said hump we were in the cloud but the path ahead was visible  and wide so we decided it was reasonable to press on. I think we were at about 650m by then. The steady climb gave way to steeper sections with zig-zags and the visibility worsened. Christy was back on his lead since he had found a stone and was tossing and chasing it and I worried he might throw it over a steep drop and follow it.

The ground became increasing snow-covered and between the last couple of zig-zags there was on a thin strip of visible path. Eventually we came to a steep section of path completely covered in icy snow. I wondered if it was just a short section we could get past but the first couple of steps told me it wouldn’t be safe without crampons. We paused for though and both decided it was best to turn back. The GPS tracker had us at about 810m, so only about 60m below the summit.

Walking down was easier on the respiratory system, but more challenging for the legs. The cloud had cleared from the lower slopes allowing us to see Scales Fell properly. It is quite a pleasant ridge walk, especially downhill. The lower slopes however are steeper and we chose to take the alternative final path down beside the fence. Quite an experience. Steep descent on slippery mud. The fence beside me had obviously been much grappled and I used it the same. Christy was back on the lead because of nearby sheep and that added to the fun, being connected to a excitable dog while negotiating the treacherous path. I sighed with relief at the bottom. Audrey was afflicted with Elvis legs following the descent and I was aghast to hear that it was the first time she had ever experienced it.

Share this...
This entry was posted in Cumbria and tagged Wainwrights, Winter. Bookmark the permalink.