Pies and The Back o’ Skiddaw 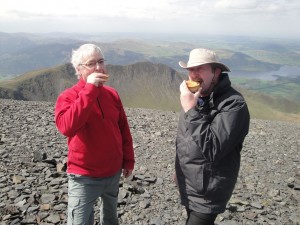 Mike & Andy tucking in to pies

Our third 3000 footer in as many days so the muscles and toes were tender. We decided that it was time for a change from the packed lunches, nice as they were so David went foraging before the walk and purchased three meat and potato pies from a local shop. Since they were wrapped in a single packet, he also carried them up the hill for us. Talk about taking three for the team.

Our walk started at Peter House Farm, which we found following a minor detour. At the parking spot was a curious sign informing us that Skiddaw house was 3 miles and Dash Falls 7 miles. But Dash Falls is on the way to Skiddaw House. I spent most of the day and some of the next brooding about this and contemplating who should be informed of the error. On reviewing the evidence (a photo of the sign) however it all became clear. The sign actually reads:

The route follows a farm track up to Dash Falls and the impressive Dead Crags of Bakestall, starting with a gentle climb that slowly steepens. At the col between Bakestall and Little Calva is a gate, a good place for a breather, and the addition of some warmer clothing since the wind was getting stronger. We could not see a path up Birkett Edge, though one is marked on the OS map. Andy carried on up the path to see if one could be seen but found nothing. We decided just to head up the grassy slope, and within a few paces the invisible path became obvious. This section steepened further and reminded me of the steep path off Durisdeer Hill. Indeed when we stopped for a breather I Iay down on the ground and was not that many degrees off standing up. While David and Andy charged on straight up, I practiced my zigzagging.

Bakestall summit, really just a shoulder of Skiddaw, is marked by a cairn, and offered another spot for contemplating the surrounding hills such as Blencathra and the now visible summit of Skiddaw itself. The grassy slopes gave way to broken shale as we climbed to Skiddaw and once on the summit itself there was not a single green thing growing.

Our local friend, Criffel, was just visible on the horizon and closer at hand we could see the rest of our planned route over Long Side, Ullock Pike and The Edge, the fourth “edge” in two days.

We made use of one of Skiddaw’s many short shelters to take in some fluids and eat our pies, and very nice pies they were.

The next stage, the descent to Carlside tarn, down a steep slate and shale covered path adjacent to an impressive 400m+ drop was an experience to say the least. David had recommended I get the walking pole out for this one, and he was right. Two people who I passed on the way informed me that if I slipped I’d be at the bottom in no time, which was not really what I needed to hear. I found my steps were getting shorter and had to force myself to make each pace at least the length of a foot. David and Andy seemed to fly down and sat waiting at the bottom for me for ages. In fact by the time I got down to them they had both grown beards and were covered in cobwebs.

David tells me that I looked like an old age pensioner making my way down the path. I’ve wondered if that was meant as constructive feedback, but suspect he was just taking the piss. But he was good enough to mind mine and Andy’s bags while we went to the top of Carlside.

Once back at the Tarn we got our rucsacs back on and headed for Long Side, Ullock Pike and the Edge. The path here is well defined, safe and offers great views of Bassenthwaite Lake and Skiddaw. There are short scrambles but all have bypassing paths which we took.

On the way down there is a rock outcrop which looks almost like a stone circle but is I think natural. It is marked on the OS as Kiln Pots. There are photos in the gallery.

The final mile and a half, after coming off The Edge, is through farms and mostly on tracks or roads. We did pass several small arrows of the kind found on the SUW but none were at junctions and did little more than remind us the we were on some kind of route, though without any idea about destination. The fact that we came across stiles was more of a sign that we were on a route of some sort.

Another good days walking in fine weather. Meat and potato pies on the summit, Lamb Henry at Oddfellows that evening, and five Wainwrights in the bag.